At residency this past May, I lectured on the tradition of response poems to Walt Whitman. The briefest of overviews concerning literary imitation was provided; and, we discussed how the response poem to Whitman seems to be unique in the history of literature. Not only are there a large number of poems that address Whitman as literary predecessor, countless poets write in a vein they consider to be Whitmanic. Given the sheer number of the poems and poets, there was much that was left out. We looked at the aesthetic and political responses of Ezra Pound, Langston Hughes, Allen Ginsberg, Rubén Darío, and Pablo Neruda. The briefest mention was made of June Jordan, Alicia Ostricker, Yusef Komunyakaa, and the Dominican poet Pedro Mir. For the most part, all these poets engage Whitman and the tradition surrounding him with earnestness.

Indeed, the persona created in Leaves of Grass invites such earnestness. Also, politically engaged poetry is itself often sincere. The presumption made by the reader is that the poetic voice is being honest with itself and with the public in what it says. Not only this, often the poetic voice and the person of the poet are believed to be speaking as one. Even Pound who comes to Whitman as a petulant son filled with cosmopolitan ennui and bored by the politics of his predecessor, but who takes from Whitman a number of aesthetic innovations, is earnest in his disdain.

What I did not get to are the ironists. We need ironists in this world. We need doubters, naysayers, and all those that remind us that we cannot take the world too seriously—not ourselves, not poetry, not our calling as writers. A distance is necessary, both for the sake of our art (and what it takes to perfect it) and for the sake of our psyche (and what it takes to protect it). 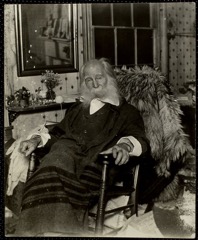 One of these ironists is Jorge Luis Borges. In his 1964 collection of poems, El otro, el mismo, the Argentine includes a quiet sonnet to Whitman titled, “Camden, 1892.” It’s a poem that could almost be an ekphrasis of the 1891 photograph of Walt Whitman by Dr. William Reeder. In this photo we see the aged bard in his Camden bedroom, newspapers piling up beneath the rocking chair. The title of the sonnet situates the poem one year after the photo and in the year of Whitman’s death.

The smell of coffee and the ink of news.
Sunday with all its boredom. Not yet noon,
on the page, barely read, the bootless
print of some other poet’s cryptic croon.

Yes, that writer’s happy.  And the old gent,
is weak and white and in his well-kept place,
a humble room.  He views with indolence
his face in the worn out looking-glass.

He thinks, now without wonder, that he is
that face.  His hand, without thinking, touches
his mess beard and his marauded mouth.

The end is nigh.  He hears his voice speak this:
I’m almost not, but in my song quickens
life and its splendor.  I was Walt Whitman.

Borges, though known in the U.S. for his short fiction, began as a poet and continued writing poetry throughout his life. When he first started, he was a member of the Ultraist movement, a group squarely centered in the avant-garde that strove for a pure, hard, image driven poetry that broke away from traditional Spanish versification. By the 1960s, though, Borges had returned to formal poetry. His collection, El otro, el mismo, is largely comprised of sonnets, rhyming hendecasyllabic quatrains, and other metered verse. The collection is concerned with the world of literature, with poems to poets, novelists, fictional characters and worlds, and with the labyrinths, mazes, and philosophical games found in Borges’ short fiction and literary essays.

There are some Latin American poets whose relationship to Whitman is obvious: Pablo Neruda, Ernesto Cardenal, Pedro Mir, to name three. This can be seen in their long lines, in the conversational tone of their work, in their direct use of Whitman (often as a critique of U.S. imperialism), in how the political vision of their work translates Whitman’s expansive understanding of democracy into a defense of the poor and the oppressed. 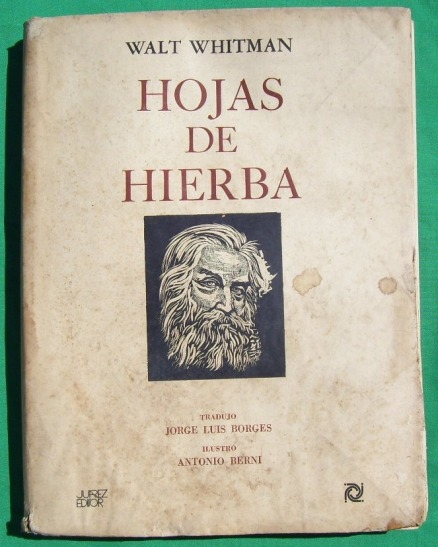 None of this is Borges. While mature Borges does not evidence any traditional Whitmanesque influences, early Borges does. Quickly, though, he moves on to other literary models. More importantly than whether he wrote long, unmetered lines, Whitman is one of those writers that consistently appears in almost every one of Borges’ books. He even translates Leaves of Grass. Rather than chase down those moments where Borges either evidences this debt to Whitman and/or mentions him, I want to turn to the sonnet.

Though I’ve called Borges an ironist (and he certainly is), the sonnet is not mean or vicious. It’s humanizing. Borges wants little to do with gods, even literary gods. His stance, though, is not the stance of Pound. He is not a querulous child fussing at a parent. He draws an intimate portrait of an old man, tired, near death, in his room on a Sunday morning. After seeing his reflection in a mirror, the subject acknowledges that death is immanent, follows that statement with a boast about his own poetry, before concluding: “I was Walt Whitman.”

Borges’ sonnet is not a political reading of Whitman, but it’s a necessary one. While it notes that Whitman’s verses are full of the splendor and rhythm of life (and thus the poem can be understood as a celebration of his work), it doesn’t try to recreate that splendor. Instead, it contrasts the vain allegorical verses of some unnamed poet with Whitman’s verse, which has been able to seize on and affirm life. That isn’t the only contrast the poem sets up. It further contrasts the tedium of the Whitman’s daily life with the splendor of his poetry.

This sonnet is like Hans Holbein’s painting The Ambassadors, the one with the anamorphic skull between the two figures. Right in the middle, at the volta, as the second quartet transitions to the first tercet, a mirror appears in Borges’ sonnet. The first tercet comments on the reflected image: the wizened visage of the poem’s subject. The second tercet, responding to the image in the mirror, names death’s nearness. But, this momento mori, which would have been the typical conclusion of Renaissance sonnet, isn’t the revelation arrived at by this modern one. Instead, this encounter with the ravages of time, with that sort of death mask in the mirror, is what brings about the insight. There are actually two revelations: 1) the affirmation that life beats its rhythm out in Whitman’s poems, 2) that that person looking in the mirror was Walt Whitman. Notice, though, the voice does not say, “I am Walt Whitman.” It says, instead, “I was Walt Whitman,” implying, then, an, “I am that no more.” It as if an old sports star were to say, “I was somebody. I was a champion.”

The two statements of this double realization express a central concern in Borges’ body of work: the difference between literature and life, between life on the page and the life lived as an author. Whitman’s poetry throbs with the splendor of life. Ritmar means to beat with rhythm. Borges conjugates this in the present tense. This use of the present is contrasted with the use of the preterite in the final declaration of the poem, “I was Walt Whitman.” Though the work is infused with life, the person will die. Yet, as noted, the realization is even starker: the person in the humble room and on death’s door is no longer Walt Whitman.

In his 1947 essay, “A Note on Walt Whitman,” Borges affirms “there are two Whitmans: the ‘friendly and eloquent savage’ of Leaves of Grass and the poor writer who invented him.” It is important to understand, he writes, “that the mere happy vagabond proposed by the verses of Leaves of Grass would have been incapable of writing them.” (1) One is constructed by acts of imagination and rhetoric, the other lives out a rather uneventful life in and around New York and New Jersey.

Borges’ Whitman is, of course, not Whitman, but one of the many Whitmans out there. And, in real ways, Borges’ Whitman is the obverse of the persona presented in “Song of Myself.” That is, despite the contradictions Whitman claims to possess, Whitman’s confessional act in “Song of Myself,” and the rest of Leaves of Grass, is largely understood to be part of an honest self-disclosure. Borges’ Whitman, though, stresses that this act of self-revelation is crafted. That the author and the figure of the poet are not the same thing.

By hiding the identity of the subject until the anagnorisis that comes at the closing of the poem, the sonnet teaches much about detail and pacing. Of course, readers who know Whitman have a clue as to who the subject might be. The title announces that it takes place in Camden, in 1892. Still, by withholding the self-revelation, “I was Walt Whitman,” until the last line, the poem enacts the separation between the figure of Walt Whitman created and presented in Leaves of Grass, and the author himself. The slow pacing of the first stanza—the image fragments stacked one on the other, the absence of an active verb or subject—create the scene. Indeed, there is no active verb until mirar, the first word of the last line of the second quartet. The line where the old man idly looks at himself in the mirror. Boredom and weariness, and then the glimpse of death’s face that leads to the double realization I’ve already mentioned. 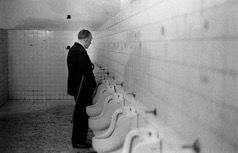 There is, though, hope, especially for the writer. After all, this man was Walt Whitman. Momento mori hardly ever make for happy poems, unless they are the goad that leads to carpe diem. Here it leads to the realization of the difference and distance between the writer and the persona created by the poem—a healthy and necessary thing to keep in mind for all writers. Furthermore, the sonnet can be studied to see how to use contrast to great effect, how to use verbs (or their omission) and differing tenses to further advance meaning, how to play with and place those moments of recognition that make poetry interesting, how to make the volta spin, not just once but twice, even three times.

In closing, since this is about writing and the necessary ironic detachment one needs to work on one’s art and that one needs in order not to take one’s self too seriously, I leave you with this photograph of an elderly Borges, the blind librarian, in a labyrinth of urinals.

Jeremy Paden is a faculty member in poetry and translation for Spalding University’s Low-Residency MFA, a Professor of Spanish at Transylvania University, a member of the Affrilachian Poets, and a recipient of an Al Smith Fellowship from the Kentucky Arts Council. He is the author of several poetry chapbooks: Broken Tulips (Accents Press, 2013), ruina montium (Broadstone Books, 2016), and prison recipes (Broadstone Books, 2018). He also has a chapbook of translated poems: Delicate Matters (Winged City Press, 2016), is co-editor with Bianca Spriggs of an anthology of Affrilachian poetry, Black Bone: 25 Years of the Affrilachian Poets (University of Kentucky Press, 2018), and his collection ruina montium has recently come out in Spanish (Valparaiso Ediciones, 2018).