I’m a big fan of ambiguous endings. I have no problem with being left in the middle of things in the last scene. In fact, I find pleasure in lingering with a range of possibilities after the final page is turned. I have no quarrel with a novel or memoir that closes with its main character teetering on the brink of change—rather than safely ensconced on the other side of it.

As John Fowles once wrote, “an ending is no more than a point in a sequence—a snip of the cutting sheers.”

But I also savor bigger-picture narratives that render a story full circle—for example, a novel that portrays a long life, vividly, cradle to grave. The truth is, I have no litmus test for a well-turned ending. Hopeful, haunting, tragic, testy, even an either-or ending has its place. I’m a grown-up. I can handle closure in whatever shape it arrives. 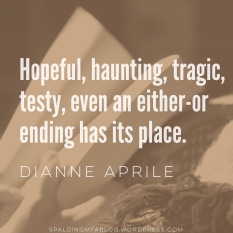 Please, dear writer, don’t leave me with a synopsis. Don’t suddenly skip ahead in time and wrap things up for me in a tidy summary. I resent being handed a book-proposal for an ending—especially if the writer’s prose leading up to that disappointing finale has held me in thrall for hundreds of pages. If you have presented me with the delicious challenge of living with a conflicted character in uncertain circumstances, don’t expect me to like it when in some twisted version of a postscript you tell me she died at some later point in time, in some unknown, generic way. Such a sign-off is even more treasonous when it comes on the heels of a scene in which that character was alive and well, still caught up in her messy, lovely life. Really? No specifics?

The good news about confronting this kind of dreadful cop-out is that you can learn from it—about both a writer’s obligation to the reader, and readers’ expectations.

My latest experience with disappointment at the hand of a “summation” ending came after reading Margaret Drabble’s latest novel, The Dark Flood Rises. Drabble, a prolific British writer, is the sister of A.S. Byatt, the Booker Prize-winning author of the novel, Possession. John Drabble, the two sisters’ father, was also a novelist. So how in the world did such a pedigreed writer fail to realize how unsatisfying she rendered the last pages of her new novel—a book, by the way, that otherwise explores with depth and candor and unflinching detail her protagonist’s struggle with the coming of old age and its cranky sidekick, mortality.

My dissatisfaction with her bland tying up of loose ends led me to analyze why the summary-style ending doesn’t work for me. Consider this your Spoiler Alert.

From page one, I admired Drabble’s attention to the emotional cadence and the physical rhythms of the life of her self-questioning protagonist, Fran. Despite its lackluster ending, I admit I still ponder the novel’s many insights and commentaries on contemporary culture. And I treasure Drabble’s sure-footed and precise use of language.

But how could she have failed so miserably to bring her story to a conclusion? The last time we see Fran, whose perspective is the novel’s, she’s contemplating mortality—but in no way seems near to achieving it. Yet, a page later, Drabble hauls out an omniscient narrator to inform us (from some future place in time) that one of Fran’s good friends outlived her. And that is how we learn of the death of this character whose wishes and fears, on some level, have come to be our own. It’s also the last we hear of her.

One excuse I’ve read for such endings is that sometimes a writer falls too much in love with her own characters. Portraying their departure becomes simply too painful. Rather than stick by her creations through the soul’s dark night, the author beats a hasty retreat into synopsis. This could be Drabble’s error. 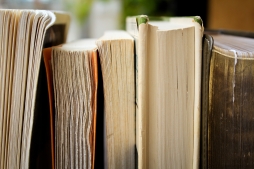 Joan Acocella, writing in The New Yorker, once complained that she reviewed a lot of books, and “Again and again, the last chapters are hasty and dull. ‘I’ve worked hard enough,’ the author seems to be saying. ‘My advance wasn’t much. I already have the idea for my next book. Get me out of here.’” In the author’s defense, Acocella quotes E. M. Forster, who, writing in Aspects of the Novel, surmised that nearly every narrative’s ending is a letdown. “Alas, (the writer) has to round things off, and usually the characters go dead while he is at work.”

This feels like what happened to Drabble. Literally, she let her characters go dead—but safely offstage, in limbo, out of the sight of their creator. Fine and good for her, but what about the reader?

So, what can be taken away from a close reading of such an evasive ending? The question at the top of my list is simple—Where was her editor?

But more significant for us as writers and readers, the lesson is one of literary obligation. The faithful writer will keep telling a story until her story ends. That might be in the middle of a character’s life, or at the end of it. The timing doesn’t matter.

What matters is that the ending is organic—integral to the overall shape and tone of the narrative. It means central characters are allowed to stay on stage until their part is over. It means the writer can’t just round them up on the last page and account for them, perfunctorily, as if they were survivors listed in a newspaper obituary.

Dianne Aprile is an author and editor of nonfiction books, including The Eye is Not Enough, a collaboration with printmaker ML Hess, and The Book, a fine-art collection of photographs and letter-press text. She lives on the east side of Seattle with her husband Ken Shapero and their illustrious tabby, Mr. Leo.