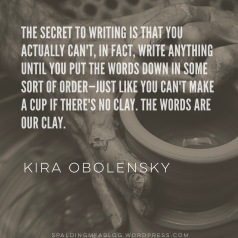 Greetings, fellow writers. I write to you from the distant fields of my own particular revision process; the mud pit of the second draft.  Most of the writers I know talk about revision without saying the word. When I ask a writer friend about her revision, her response is, “Knee deep. I’m putting the damn thing in first person now.”

Once we have “shitty first draft” (thanks to Anne LaMott for this essential description),  we begin revising. The secret to writing is that you actually can’t, in fact, write anything until you put the words down in some sort of order—just like you can’t make a cup if there’s no clay. The words are our clay. You squish them around; you make them into another structure.  You can pound them flat, reshape, attach something  on top, or at the end.  And you’ve got time to work that clay for awhile, until sometimes the clay will resist, or it just doesn’t work anymore…but that’s another discussion.

Often these early maneuvers are in fact a kind of “re-vision”– another vision born from the first.  Sometimes we need to re-dream the story. Sometimes the first draft’s time scheme is too compressed, or too leisurely. How does the narrative use chronology?  Re-vision can happen when we begin to move things around in time. The great fiction writer Alice Munro talks about cutting apart her stories and physically re-building them.

I asked fiction writer John Pipkin about his bold revision of his new novel, The Blind Astronomer’s Daughter. John said that often the first draft will tell him where the story wants/needs to go, despite his efforts to control it. “In the first draft, two very important characters were not very present in the story. I didn’t want them in the story at first, even though I felt them trying to enter at several points. When I stopped resisting them and let them enter—and once I let them into the story, everything began to fall into place, and many of the narrative dead-ends resolved themselves.”

All revision involves more than rethinking structure, plot or character. I look to this language-specific revision as a way in which to expand for clarification, or a way to cut or condense for speed, tempo or lightness. This work is specific and sometimes a little surgical. We might erase, if there’s too much language. Take a look at this line of dialogue with some pruning.

CLERK: The man who wore this coat did not show up for work.  About two     weeks ago he stopped coming to work.  He sat there at that desk. Empty now for two weeks.   But we don’t know a thing about him.  Just this old…rag.

Now look at it—it’s better, right? And it just needed a little pruning. This kind of erasure exercise is really exciting when you’re writing dialogue because we are always looking to find the specific music and rhythm of our characters.

And, if things are underwritten, we may want to go in and “embroider”—give a scene, or a character more words, more texture.

Even when a play is finished, when we’re in rehearsals, the process of revision continues.  Theater-writers cut, adjust and move, even within a production.  As playwrights, we are always “tweaking.”

What about when the play is ostensibly finished?  Colleague Charlie Schulman just mentioned to me that he’s revising Character Assassins, his well-received play that has already been produced. He’s adding a character, changing the title, even. For him, the revision is about re-activating, and renewing material to  give it a new life.  He says, “ I know I’m on the right path if the revision helps me get at the heart of what I was trying to convey in the previous draft.”

So dear writer, in your re-vision, wright-ing, erasure, embroidering and tweaking I wish you both courage and inspiration. Revise like your script depends on it!

Kira Obolensky is currently a two-time recipient of the Mellon Foundation’s National Playwright Fellowship. She is also the co-author of the best-seller The Not So Big House and the author of two other books about architecture and design. She won Quarterly West’s novella prize with her novella, “The Anarchists Float to St. Louis.” She is delighted to be part of the dramatic writing faculty at Spalding’s MFA Program.